Portrait of a Man in Red Chalk, circa 1510. Widely believed to be a self-portrait of da Vinci, though some scholars question whether it is. 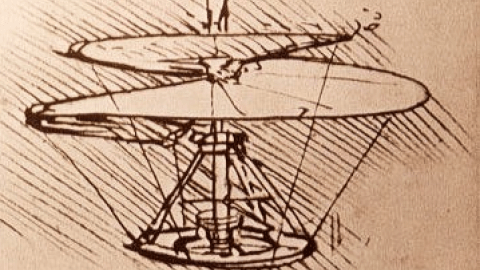 Aerial Screw, from Codex Atlanticus, 1478-1519. Da Vinci sketched this unique machine, often seen as a blueprint for helicopter technology over 400 years before its time. 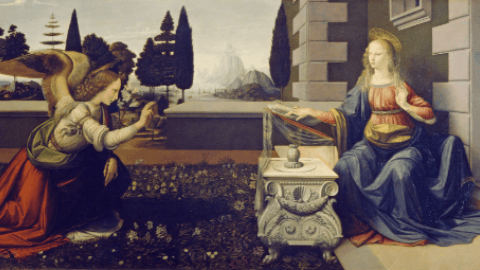 Annunciation, circa 1472-1475. Painted by da Vinci while he was an apprentice in the workshop of artist Andrea del Verrocchio. 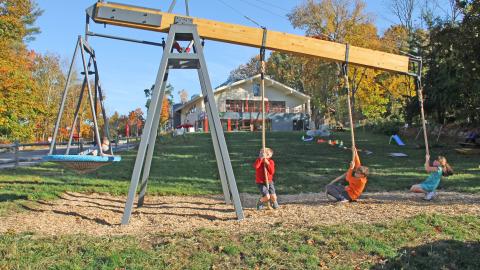 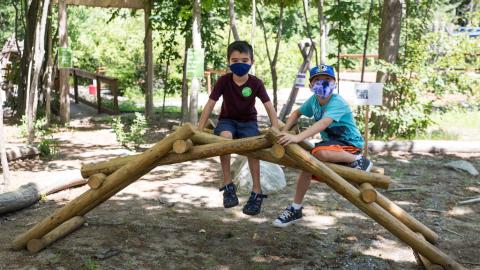 The Bridge, based on da Vinci's design for a self-supporting bridge, at Discovery Museum. 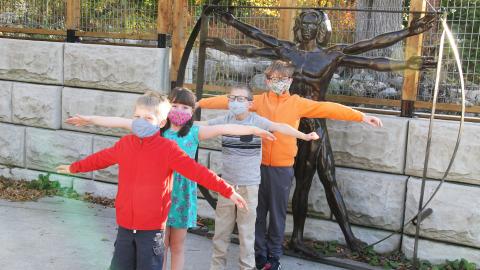 At Discovery Museum, we celebrate the inspiring life of Leonardo da Vinci and support the same creative potential in all Museum visitors.

In the da Vinci Workshop and throughout the Museum galleries, be inspired by da Vinci’s passion for studying and exploring the wonder of the world around us.

Outdoors on our campus, explore the Bridge, Vitruvian Man, and Lever exhibits that are inspired by da Vinci's perspective and work.

A Lifetime of Curiosity and Creativity

Leonardo da Vinci was a student of the world—who never went to school! Fueled by his own curiosity and wonder rather than a formal education, da Vinci was an inventor, sketch artist, mathematician, painter, engineer, sculptor, and architect. He was profoundly interested in ecology, anatomy, geology, astronomy, and botany.

The Study of Connections

Leonardo da Vinci believed that science, nature, and art were not entirely separate pursuits, but that each informed and enriched the other. For example, his study of the human body improved his painting; his observations of birds became the basis for sketches of flying machines.

Many of da Vinci’s mechanical sketches were not built until long after his death. For instance, in the late 1400s, da Vinci sketched a design for an aerial screw, which is widely seen as a sort-of blueprint for helicopter technology. But in fact, the first helicopter would not fly until 1939. And yet da Vinci continued to envision new inventions and record his ideas—imagine if he had gotten frustrated and threw away his drawings of the things that didn’t work?!

Maps are important for many reasons. They give us information about a place and help us find our way from one location to another. They can also teach us spatial thinking as we imagine the items on a map and where they are in relation to one another.

One of the most common maps is an ichnographic map, which has a top-down view like the maps on Google Maps. These maps are easily made nowadays using satellite imagery and software, but Leonardo da Vinci found a way to make an ichnographic map hundreds of years before those technologies were invented. In 1502, da Vinci created the map of Imola, Italy, as seen here, by carefully measuring the length of buildings and the angles of streets. For more information on the map of Imola check out this short video from Vox.

Not much was known about human anatomy, beyond what was obvious on the outside, when Leonardo da Vinci was alive. The technology we have today that allows us to see inside the human body, like x-rays and scans, did not exist during the 15th century. In order to learn more about human anatomy, da Vinci dissected and studied over 30 cadavers. Da Vinci closely studied the body’s inner workings and turned his observations into beautiful, detailed sketches.

Looking for a little insight into who exactly Leonardo da Vinci was?

Leonardo da Vinci did not have the opportunity to formally study math or science in school. Instead, he spent much of his time observing nature and the world around him. Throughout his life, he filled over 50 notebooks with his ideas, observations, questions, and sketches - including plants, animals, light, water, the human body, and mechanical creations.

Leonardo da Vinci was particularly fascinated by the idea of flight. He studied birds, paying close attention to how they moved their wings. He then used these observations to create sketches of mechanical wings, which he believed humans could use to harness the power of flight. It is widely believed da Vinci never achieved his goal to experience the thrill of flying. However, his drawings show a persistence in pursuing his ideas. He drew a few different depictions of flying machines that are now seen as plans for a helicopter and airplane, hundreds of years before their time.

Leonardo da Vinci studied and sketched a wide variety of subjects, including the human body. Da Vinci used his observations to create drawings that made connections between humans and the larger natural world. Vitruvian Man is one of da Vinci’s most famous sketches and highlights his study of proportions within the human body.  This drawing shows how the lengths of different body parts compare to each other, which in math is called a ratio.

In his study of engineering and architecture, Leonardo da Vinci showed a meticulous and innovative approach to bridge design. One such ingenious design is a self-supporting bridge, which da Vinci created while serving as a military engineer. Also called “The Bridge to Safety,” this particular bridge can be assembled without any nails, ropes, or other fasteners, relying only on friction and gravity to allow users to cross safely. Da Vinci planned his self-supporting bridge with soldiers in mind, considering the need to quickly set up and take down the bridge, using materials that could be easily carried or gathered from the environment.

As an inventor and engineer, Leonardo da Vinci studied simple machines and used them in new and interesting ways in his own complex inventions. A simple machine is a tool that makes work easier. The wheel and axel, wedge, screw, inclined plane, pulley, and lever are all types of simple machines – and each can be seen in da Vinci’s mechanical and architectural drawings. For example, da Vinci often made use of the lever in his creations. A lever is a rod that rests on a fulcrum point and can be used to lift or move objects.