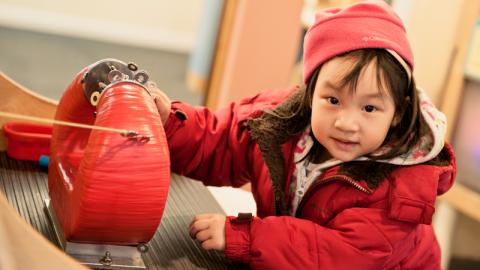 How Did We Get Here?

The new Discovery Museum will soon be open and ready to welcome our curious, capable, imaginative young visitors. This has been our goal for many years and the focus of innumerable hours of imagining, designing, fundraising, and building. Soon we will achieve that goal—so, what comes next? Before we answer that, we should remind ourselves why we took on this monumental project in the first place.

From the start—36 years ago—we’ve been a place where children learn through hands-on, open-ended play. But there’s always been a possibility for more. Ideas germinated for years. The museum wanted to place a greater emphasis on the outdoors and the environment, and at one time envisioned turning our campus into a science-themed park.

In 2007, we acquired the green house at 183 Main Street, which prompted a closer look at how we could put some of these ideas into action. We had 4.5 acres of property and we needed to figure out what to do with it. The museum developed an ambitious plan to expand our buildings, transform the outdoor areas, and turn the green house into the “Environmental Discovery Museum.”

Unfortunately, these bold ideas coalesced just as the economy took a downturn. When I came to the Discovery Museum as CEO in 2009, we were in a period of retrenchment. We needed to take a careful look at our financial picture. We made some tough and painful choices that helped put us back on course.

Several years passed before we were ready to take another look at our campus plans. We still wanted to do more with nature and the outdoors. By then, we also had embraced accessibility as a key priority for our organization, not just for our buildings, but programmatically. We believe that learning through play is essential for all children. In 2010, we began actively reaching out to families who face financial, physical, or developmental barriers to visiting the museum. We dedicated ourselves to making all of our spaces, exhibits, and programs inclusive and accessible, a goal that is unwavering and underlies everything we do. We now serve 26% of our audience for free or at a deeply reduced cost through programs aimed at making the museum accessible and welcoming for every child.

In line with our commitment to accessibility, it became imperative that we update and modernize our facilities. We were also growing and simply needed more space, not just to attract new visitors, but to accommodate the ones we already had.

We approached The Manton Foundation for funding to initiate our campus renovation. They didn't say No. They said we weren't ready, and agreed to fund a feasibility study. Through this process, our community came to recognize that we hadn't made a significant investment in our buildings for a long time, and that it was time to make one.

In 2013, the board launched a $7 million capital campaign to finance a complete renovation and expansion of the Science Discovery Museum building.  The Manton Foundation then agreed to fund a $3 million Leadership Challenge, which we matched by 2015, a year ahead of schedule. In 2016, we expanded the project’s scope to do even more with our outdoors and set a new campaign goal of $8.4 million.

We completed the first phase of the project in June 2016 with the opening of Discovery Woods, an inclusive and accessible outdoor nature play area and treehouse. Our objective: every kid, every day, outside to play. In the 12-months following Discovery Wood’s opening, visitation increased by a gratifying 39%.

We ended the capital campaign in 2017 with $8.8 million. More than 200 individuals and organizations contributed to the public phase of the campaign, 33% of which were first-time donors to the museum. Many of these gave a second, third, and even fourth time.

The outpouring of community support made Discovery Woods and the new Discovery Museum possible. But a shiny, new building isn’t what motivated people to contribute. People gave because of what the museum has done for the last 36 years: inspired children—of many backgrounds and abilities—to be their most curious and capable selves.  The community has shown that they want us to keep doing what we’ve always done, and they have faith in us that we will. Thank you.

I joined Discovery Museum in September 2009, and feel lucky to serve this terrific community of kids, families and supporters. After serving as Budget Director for the City of Boston, my museum career began in 1995 at Boston Children’s Museum, where I served as Executive Vice President and Chief Operating Officer. My priorities for the Discovery Museum include supporting kids and families to play and learn together; expanding outdoor learning; increasing access for underserved populations; and building upon our year history to create a museum for the next 30 years.