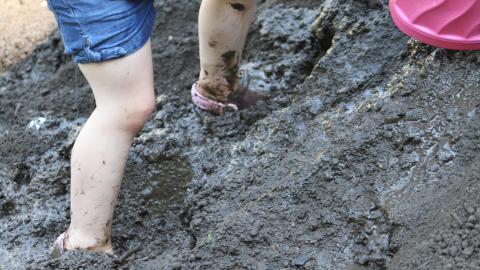 When Hillary Einboden visited the Discovery Museum for the first time, she knew she’d found a “unique and wonderful place"—a noteworthy observation coming from someone who spent a full year exploring wonderful places with her children.

Hillary and her children, Ezra, 7, and Eve, 3, went on the road while her husband, an English professor at Northern Illinois University, researched and wrote a new book. She homeschooled her kids during their travels, which for the Einbodens meant getting out of the house as often as possible—to science centers, children’s museums, and libraries from Florida to Canada.

On her first trip to the Discovery Museum, Hillary did what she often does at a new museum—she stopped at the Admissions desk to ask for a map. The museum—by design—doesn’t have a map to guide visitors. Nor are the walls covered in explanatory signs or instructions for working the exhibits.

“It puts the control in the children’s hands. It denies parents the opportunity to impose structure and time limits. The museum is saying ‘we’re not packaging it up for you.’ I love how open the philosophy is,” she says.

A literacy consultant originally from Toronto, Hillary is seated in Bessie’s Diner on her family’s third visit to the museum. All around, children are immersed in imaginary play. Eve piles “lunch” on the table. Ezra drifts in to show off his latest harmonograph drawing, his “best one yet,” Hillary tells him. Eve pops over periodically to report that someone isn’t sharing. Hillary nudges her back into the fray to negotiate a compromise for herself.

“In learning, we take risks,” she says. “I think the museum is willing to take risks. Learning is messy.”

Nothing could be more true on this particular hot, sunny afternoon. It was Dirtopia week at the museum, and outside kids were sloshing and digging their way through a mound of mud. It is particularly obvious with Dirtopia, but all of the museum’s programs are open ended and child led. There aren’t a lot of buttons to push or screens to watch, which Hillary, who proudly carries a flip phone, says she particularly appreciates.

Because she’s an educator, Hillary readily notices what she calls the museum’s “profound attention to detail.” From the large windows and natural light down to the jars in Bessie’s Diner filled with aromatic spices, she says it’s clear that museum staff put great thought into every feature.

She was so impressed, in fact, that on her first visit to the Discovery Museum Hillary walked right into a “Staff Only” office to share her appreciation with some of our Programs, Education, and Learning Experiences staff—very meaningful and much appreciated feedback to those who put so much time and care into designing every exhibit and program.

“I haven’t found anything I would change,” Hillary says. 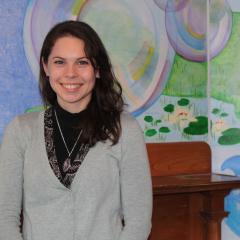 The early years are truly a special time. Not only do brain researchers tell us that an enormous amount of learning happens in the first five years of life, but I love how you can actually see this learning happening in the faces of young children. Giggles, wonderment, and puzzled expressions are all part of our early learning philosophy at the museum.